The Classical Kids LIVE! Theatrical Symphony Concert Series has collaborated with hundreds of distinguished orchestras presenting over a thousand performances to bring to life Susan Hammond’s best-selling audio stories for student and family audiences. Over two million children and adults throughout North America and abroad have enjoyed these magically staged concerts designed to bring to life the extraordinary lives and the musical masterpieces of the great classical composers. Having received more awards and honors than any other entity of its kind, Classical Kids is considered a leader in its field and proud to say, “We’re making a difference!” 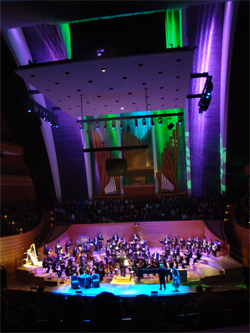 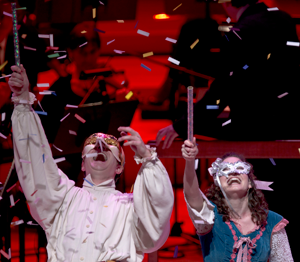 Professional actors and acclaimed symphony orchestras around the world join forces artistically to treat audiences to mesmerizing theatrical concert productions guaranteed to captivate, educate and inspire. Period costumes, props, set pieces and theatrical lightning enhance our fully directed and staged productions. These delightful concert/play performances are approximately 50 minutes in length and, with nearly two dozen of the composer’s best known excerpts, serve as an ideal introduction to classical music for any educational or family concert series.

When you book a Classical Kids concert, you get more than just a one-time show. You get brand name recognition of nearly 5 million CDs, videos, books, and teacher’s guides sold around the world. Enhance your outreach programs with Classical Kids educational resources including the new Teaching Edition.

Artistic and production creation costs for mounting professionally-produced family and educational concerts can reach tens of thousands of dollars – $40,000, as reported by the Los Angeles Philharmonic – and can take months of time-consuming preparation. Likewise, creating and producing our high quality productions fall into these cost and time categories. However, by utilizing our touring repertoire, orchestra organizations gain the ability to present finely polished, high-caliber productions at reasonable costs and with little effort.

As a not-for-profit organization, we will work to ensure that orchestras of all sizes and budgets are able to share Classical Kids with their school and family audiences. Please contact us for more information about costs and how we can help you make a Classical Kids performance a reality including a possible self-produced licensing option if your orchestra qualifies.

You have the opportunity to enhance your outreach programs with Classical Kids educational resources, raise your concert revenue by selling Classical Kids merchandise, or increase your ticket sales with free promotional support. All are offered through The Children’s Group – North America’s premier marketing company of classical music entertainment for children.

Gershwin’s Magic Key
Our newest production telling the story of a chance meeting on the streets of New York City between a poor newspaper boy and the great American composer, George Gershwin.

Beethoven Lives Upstairs
This world famous production features a lively exchange of letters between young Christoph and his uncle.

Mozart’s Magnificent Voyage
An incredible journey back in time to Mozart’s childhood and into the fantastic world of Mozart’s great opera The Magic Flute.

Tchaikovsky Discovers America
This story tells of the great composer’s arrival in New York for the grand opening of Carnegie Hall in 1891 and his famous trip to Niagara Falls.

Hallelujah Handel
A young, orphaned boy with a mysterious past and an extraordinary talent: he sings like an angel, but refuses to speak.

Christmas on Main Street
Celebrate Christmas with Classical Kids in this holiday pageant for families!

We tour North America and abroad performing at amazing symphonic venues. Find out where we’ll be next.

The Artists
Actors and stage managers are members of Actors’ Equity Association. Read more about their accomplishments.

Measuring Success
We’re very proud of our accomplishments and reputation. Learn about them here.