Vivaldi, Venice and violins: all three are celebrated in Vivaldi’s Ring of Mystery, a compelling mystery story about an orphan girl in the early 1700s who is in search of her roots. A central clue to the mystery is a missing Stradivarius violin that the Duke of Cremona has brought to Vivaldi’s school of the Pieta in the hopes of finding his long lost grandchild. You’ll have to watch the story unfold to learn its conclusion!

Venice of the sixteenth century was a wondrous place, (the Disneyland of its day) and this captivating production recreates its ambiance for today’s young people. Few children can resist the idea of a city where streets are made of water and boats are part of everyday life.

Audiences will enjoy more than twenty-five excerpts from Vivaldi’s most popular and important works, including the Four Seasons, the Violin Concerto in A minor, and the Guitar Concerto. The music is magically woven into the drama as two actors solve a mystery built around the historic context of the composer’s real life and his school of the Pieta. This exciting concert and story performance is approximately 50 minutes in length and is an ideal addition to any children’s education program or family concert series. This program is recommended for audiences age six and up. 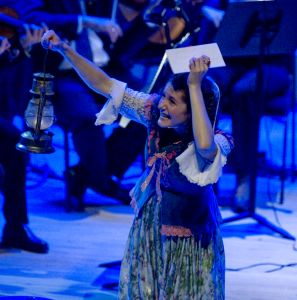 This is the story of Katarina, a young violinist who is sent to study music at the great Pieta orphanage in seventeenth century Venice. There, she comes under the tutelage of the famous music director and composer Antonio Vivaldi and, aided by the colorful gondolier Giovanni, searches the thrilling but mysterious atmosphere of Carnival and the Island of the Dead for clues to her past and a vanishing Stradivarius violin. Along the way, she comes to understand Vivaldi, his music and his reasons for staying at the orphanage despite his international fame. A touching climactic scene unites Katarina with her Grandfather and together they take Vivaldi’s music – “its spirit and soul” – out into the world.

The instrumentation listed represents the maximum number of books we will supply to accommodate the largest of orchestras. Though we sill ship our full set of parts, we defer to your judgment in reducing players based on your particular needs and requirements.

A conductor’s score, complete with full score and dialogue cues, musician parts, and a reference script is sent at least 3 weeks in advance of the concert.